I am posting these slides in connection with a discussion on the Fourth Turning forums. . . They show that the world's militaries are generally quite small by historical standards. 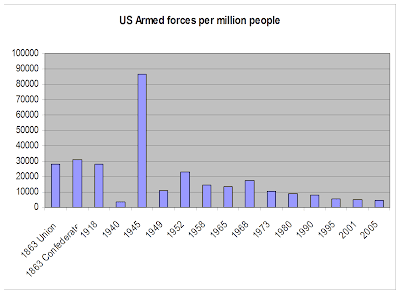 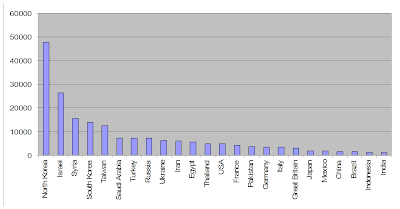 I hope, and trust, that this is not an effort to show that globalization, and free trade, have been a 'success' in reducing militarism generally;

or that, as a result of ostensibly reduced military spending (our spending has been huge however, regardless of size of army),

the future is smooth sailing, from here to eternity.....

Perhaps I misinterpret your point, in this graphic?

Perhaps one point is that all combatants will be weaker, as against all others? Granted, then.

I would concede that that is apparently true, at least at the moment, according to the received wisdom.

Gervazi's book, dated now, The Myth Of Soviet Military Supremacy, was a good antidote, it seemed, back then, to illusions, re spending versus 'size of armies', in my judgment.

Perhaps I can be corrected, on such an amateurish notion.

All the best,
GM