How the US has changed

Sometimes a picture is indeed worth a thousand words. The other day, teaching a class on the early stages of the Vietnam War, I set the scene by putting the electoral map of the 1960 election on the classroom screen. Here it is. 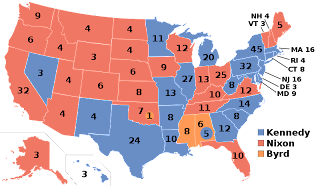 Now my students stared at this in some amazement, and one immediately asked me how Kennedy had managed to carry Texas, Louisiana, Georgia and the Carolinas. I explained that most white southerners had never voted Republican, and that there was an active liberal tradition in some of those states in those days, especially in Texas, on issues other than race. I also explained that the electoral votes of Mississippi and half of those from Alabama belonged to "unpledged" Democratic electors who voted for Senator Harry Byrd of Virginia, who had not campaigned for President at all. Lastly, I mentioned how close many of the contests were, including those in Minnesota, Missouri, Illinois, New Jersey, and California, the last of which went into Nixon's column only when the absentee ballots were counted. I should have mentioned, but did not, that Catholicism cost Kennedy millions of votes in the middle South, the Midwest, and the mountain states. But something else hit me rather hard as I looked at that map, the first one that I studied in detail in the whole of my lifetime. To put it bluntly, people like myself, in those days, were far more numerous relative to the population than they are now--and I'm not talking about race when I make that statement. Let us look for a moment at last year's electoral map to get a basis for comparison. 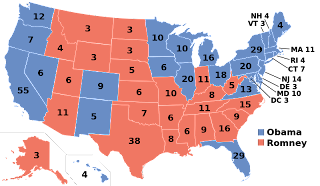 Kennedy won 201 electoral votes in the Northeast, the Mid-Atlantic region (in which I am including West Virginia, then a solidly Democratic state), and the progressive upper Midwest--that is, almost 75% of what he needed for election. But today, those states would give a candidate just 138 electoral votes. Those regions were at that time both the intellectual and political center of the country, but they have lost 30% of the share of the population that they had half a century ago. And indeed, a Democratic candidate who won Kennedy's 1960 states, plus the District of Columbia, would win only 246 electoral votes and lose the election. To put the situation in another more meaningful way, the northeastern and upper midwestern states carried by Kennedy, combined with the three reliably Democratic west coast states (74 electoral votes), the rest of New England (11), and DC (3), make just 226 electoral votes--44 shy of election. And from those must be subtracted West Virginia's five votes, which will not go for a Democratic candidate again in the foreseeable future.

The Northeast and upper Midwest were the original industrial heartlands of the nation, of course, but they were also its educational and cultural center. Their elites, who also ran cultural enterprises such as publishing, had a commitment to preserving western cultural traditions, as well as to a certain measure of economic justice. In part because in 1960 those elites had been newly supplemented with a large number of Jewish and Catholic immigrants, they were also committed to an end to ethnic and racial prejudice. The Negro elite, as it would then have been called, was separate, but shared the same values. They believed that self-restraint and respect for established authority were synonymous with civilization, and thus would have been quite shocked at the idea that citizens should walk the streets armed. They were concerned with the environment. And both parties were dominated by politicians from those regions--perhaps the biggest change of the last half century.

The northeastern elite is not only smaller, but it has done a great deal of harm to itself. The educational institutions its children attend no longer teach the traditional values of western culture or, crucially, a strong sense of the public good. Students in the humanities (whose numbers have very sharply declined) learn about the oppressive aspects of western culture; students in economics learn a model based upon free markets. Because the Progressive tradition in the upper Midwest has been eclipsed by economic changes, the great state universities of that region, once the pride of the nation, have become shadows of their former selves. (That has also happened in California.) And one of the most frightening developments in America today is the spread of fracking for natural gas into Pennsylvania and, possibly, New York. The documentary Gasland is available from HBO and I urge everyone to watch it. Fracking was clearly the centerpiece of a strategy of energy independence developed by Vice President Cheney's secret task force at the beginning of the Bush Administration. To make it possible, the Republicans snuck a provision through Congress exempting fracking from the Clean Water Act and the jurisdiction of the EPA. It has literally ruined the lives of hundreds of people in the remoter parts of the Great Plains, and it is having a dreadful effect on the air quality of the Dallas-Fort Worth area. If the gas companies can turn New York into an energy-producing state, its politics will change accordingly. Meanwhile, there is an excellent chance that they will destroy one of the engineering marvels of modern America, the New York metropolitan area's unfiltered water supply. Governor Cuomo is delaying his decision as long as possible.

It is fashionable,of course, to dismiss the achievements of the mid-century elite because it was composed mostly of WASP white males, although leavened, by then, with a good many children of Catholic and Jewish immigrants. But the Constitution that their ancestors wrote made no reference to race or ethnicity because it was based upon impartial principles. They gave us, in effect, the principle of equal opportunity. My own generation has been lacking in people determined to keep that principle alive.

Excellent analysis of demographic-political changes sinece 1960!
I disagree that fracking will be the end of the natural world here, for the same reason that Malthusian alarms have been repeatedly proven wrong.
Unregulated fracking can iondeed be a horror and a major danger, but more states are passing regulatory legislation (NC just now) and it will only take one major fracking screw-up to hit the 24/7 media cycle to force Congress to undo the Cheney deal. (I hope).
In any case, IF fracking makes us "energy-independent" by 2020, the economic benefits will be enormous, and will create more pressure for income equality, not least by ushering in a new cohort of upstart entrepreneurial millionaires.
In any case, regulating fracking will be easier than regulating climate change, or for that matter, restoring the values of western civilization in our schools.