As the stimulus package becomes law and the Treasury struggles, so far without success, to design a bail-out package that would unfreeze credit, many of us are wondering just how badly off we are and how much worse things could get. Are we nearing an ultimate nightmare, in which our national debt became so high that we could not finance it (except perhaps through inflation), leading to a substantial drop in either the real or effective value of the federal government securities into which so many of us have fled? On another site I just came across a fascinating table that provides some answers to those questions using one of the few valid measurements of human behavior, a comparative one. The table, below, shows the growth of the federal debt since 1940, both absolutely in constant dollars and as a percentage of annual GNP. It tells a very interesting story. (Simply click on the table for a larger view.] 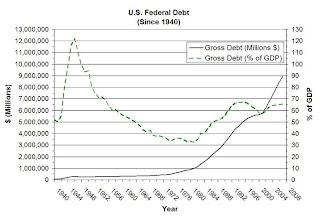 There are some ironies in this chart which naturally struck me, since I am making through an interesting book, Tear Down This Myth, about the fanciful Reagan legacy that the Republican Party has created in the last twenty years. Several years into his Presidency, when Ronald Reagan's tax cuts and spending increases had clearly created an endless string of enormous deficits, Reagan came up with a new talking point: as long as the economy grew more rapidly than the deficit, it would eventually be paid off. The table shows that that was exactly what had been happening up until the moment that Reagan took office. The Truman, Eisenhower, Kennedy, Johnson, and Nixon Administrations all ran deficits at least as often as not, but the total national debt measured as a percentage of GNP trended steadily downward all though the High and into the first decade of the Awakening. Reagan reversed that trend. George H. W. Bush's tax increase, which made him an apostate among Republicans, halted it. Bill Clinton's tax increase reversed it. George W. Bush revived it--although to be fair, until the last year he never approached the profligacy of his inspiration the sainted Ronnie.
This graph is perhaps the most dramatic representation that I have yet seen of the shift from a High--an era of steady economic growth and fiscal responsibility, which continues even into the early stages of an Awakening--to an Unraveling, which throws civic responsibility to the winds. A graph from the previous saeculum (1857-1929, say) might actually show something fairly similar, even though the federal government was so much smaller in those days. Seldom do numbers prove Strauss and Howe so clearly.
More important, perhaps, is the question of how bad things have become. And the answer, somewhat to my own relief, is--as yet, not THAT bad. True, it is alarming to find that the debt's ratio of 65% of GDP is one that the country did not reach in the previous crisis until the early stages of the Second World War--but by the time that war was over the debt was 20% higher than GDP. We have a long way to go before we get there. How long? Let's do a back-of-the-envelope calculation. The GDP for 2008 is estimated at more that $14 trillion. The national debt is now $9 trillion, leaving us with $5 trillion more to play with before we reach 100% of the current figure for GDP (which I do not expect to increase for several years.) We could, then, afford to add another trillion a year for several years at least without finding ourselves in worse fiscal shape than we were in 1945--provided we then got things back on track.
I suspect that we might, but two things will be necessary to do so. First of all, we will have to re-establish economic growth on a stable basis, and no one yet knows how that will be done. But secondly, I am becoming increasingly convinced that by that time we will have returned to marginal tax rates in the 70-90% range, such as we had during the last High. That will be the inevitable result of repeatedly failed attempts to impose some limits on the compensation of the Wall Street financiers who have destroyed the economy. Further revelations of steroid use among athletes will also make that change politically popular. We have a long way to go to return to sanity, but once again, history shows us how that might be done.
See another new post on the Israeli elections, below.
Posted by David Kaiser at 9:13 AM